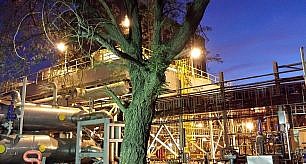 Vuselela Energy is proud to announce that our multi-award winning Eternity Power Thermal Harvesting™ clean energy project has been registered as a Clean Development Mechanism (CDM) project. This innovative project is registered with the United Nations Framework Convention on Climate Change (UNFCCC), allowing the clean energy power plant to earn carbon credits for each tonne of carbon offset by its electricity production.

Eternity Power is one of 57 registered stand-alone Clean Development Mechanism (CDM) projects in South Africa and is the only CDM project using patented Thermal Harvesting™ technology. The project not only reduces carbon emissions but also generates an alternative source of clean energy for the Anglo American Platinum Waterval smelter. The Eternity Power Thermal Harvesting™ project captures waste heat from the converter cooling circuit at the smelter to generate up to 5MW of electricity which is used by the smelter for its internal power consumption. The plant is registered to offset 15 279 tonnes of CO2 per year. The CDM credit period will run for 10 years.

The Eternity Power Thermal Harvesting™ project was developed by Vuselela Energy in collaboration with Anglo American Platinum. The power plant is a first of its kind in the field of clean electricity production.