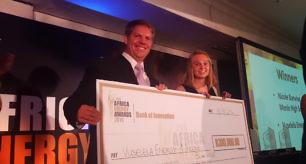 The award was received by Vernon Harding, Director at Vuselela Energy and Nicole Barwise from Menlopark High School at the Balalaika Hotel in Sandton.